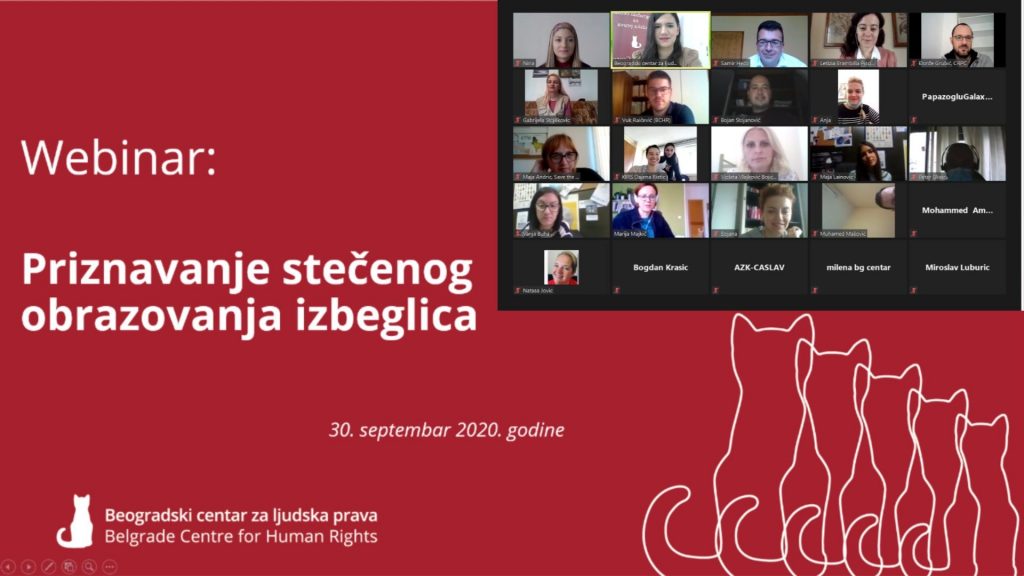 The Belgrade Centre for Human Rights, with the support of the Office of the High Commissioner for Refugees in Belgrade, held a webinar on Wednesday, September 30, 2020, on the topic „Recognizing Refugee qualifications“. The center traditionally organizes trainings on topic of importance for the integration of refugees in the society of the Republic of Serbia. The reason for organizing the training was BCHR initiative to bring closer the process of recognition of the acquired education of refugees in the Republic of Serbia through the already successful practice of the Department of Education, Council of Europe. The Council of Europe launched this initiative in 2015 in order to systematically regulate the assessment of the qualifications of refugees and facilitate the process of their integration.

The European Qualifications Passport for Refugees (EQPR) helps refugees to renew their lives in countries where they plan to stay and has some legal protection by giving them the opportunity to assess their qualifications even though when they cannot prove it with complete documentation. The Refugee Qualifications Passport supports the implementation of Article VII of the Lisbon Convention on the Recognition of Qualifications (1997) which facilitates the recognition of refugee qualifications even in the absence of complete documentation. The convention was jointly prepared by the Council of Europe and UNESCO. It was created to simplify the legal framework on European level and to replace in the long term the previous six conventions adopted on this issue by the Council of Europe and UNESCO. Recognition could only be refused if the qualification is significantly different from that in the host country, and it is the responsibility of its educational institution to prove it.

The Refugee Qualification Passport is a document that summarizes the highest acquired qualifications, language skills and work experience of the applicant. Refugees can use the Refugee Qualification Passport when they want to attend further studies and/or seek employment, apply for scholarships or re-enroll in studies. The recognition process includes three steps: assessment, explanation and practical use of the passport in further integration steps. The second part contains information on the legal status of the document and a brief description of this project. The third part contains information on further steps and contact information of state bodies and agencies, steps in the job search process and application for continuing education. Although this document does not constitute a formal recognition or authorization or license to pursue a particular profession, the qualification passport provides credible information that may be relevant regarding job applications, internships, qualification courses, and enrollment in studies. This document is valid for five years from the date of issue. The main document goal is to make a possibility for those people to have the opportunity to improve their language skills, continue their studies, increase employment opportunities or apply for formal recognition or approval of their education within that period.

The webinar was moderated by Jelena Ilić, Senior Integration Specialist at Belgrade Centre for Human Rights.