From A to Z – Guide to Refugee Education in Serbia 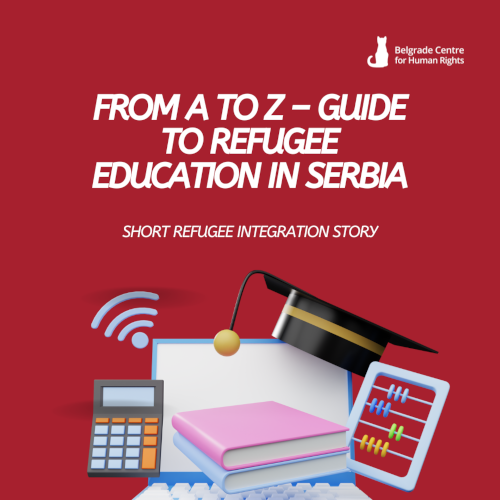 School days are the best days of our lives. Whether or not we agree with this saying, most people in the world attend school. Although education is often taken for granted, a lot of people have trouble accessing this fundamental human right.

Estimates are that nearly a half (48%)[1] of refugee children do not go to school or have access to the education system. Appalled by this fact and, on the other hand, inspired by positive integration examples, we have prepared this brief guide on education of refugees in Serbia, illustrated by the example of Ziara Farah, BCHR’s client.

Ziara’s story in Serbia began in 2016, when she and her mother asked the Belgrade Centre for Human Rights to represent them in the asylum procedure.

Ziara completed primary school, 7th and 8th grades, in Stepojevac, a small town near Belgrade. Under the relevant Serbian law, specifically Articles 48 and 55 of the Law on Asylum and Temporary Protection[2], refugees and asylum seekers are entitled to free primary and secondary education.  Pursuant to Professional Guidance on Integration of Refugee and Asylum-Seeking Children in the Education System issued by the Ministry of Education, Science and Technological Development, enrolment of migrants, asylum-seekers and refugees in primary school shall be based on their age and a knowledge test they take before a designated school team; they do not need to provide educational records proving which grades they have completed.

The primary school period is generally one of the most important periods in life. Consequently, the children’s integration and the habits they acquire in that period deeply reflect on their subsequent education and accomplishments. Like other refugee children attending school in Serbia, Ziara faced an exceptional challenge – mastering the Serbian language. Spending all day in class is in itself extremely challenging, but following class in a language one does not know or understand well or at all is even more challenging. Foreign children are often enrolled in schools where teachers are not fluent in English and unable to translate specific concepts into English or lack the time to devote special attention to them. Ziara started dealing with the problem by attending private Serbian lessons together with her mother, albeit only for a month, a too short a period to learn any language. They focused mostly on writing, since the Cyrillic script was very new to them. Although they have been living in Serbia for quite a while now, it took them a long time to gain the self-confidence to speak Serbian – Ziara felt comfortable speaking Serbian only when she was in 10th grade.

Choosing a secondary school. This is a problem faced by many young people in Serbia. But what happens when your choices are limited for a number of reasons? Due to her fear of failure, and, even more of her non-fluency in Serbian, Ziara decided to enrol in a vocational school rather than a classical high school; she thought she would master the practical training more easily although she did not speak Serbian well.

The administrative aspect of Ziara’s enrolment went smoothly since she finished primary school in Serbia. Other refugee children have to translate and validate their primary school diplomas, not always an easy task. Furthermore, the conversion of grades from other education systems to the Serbian ones – which carry a specific amount of ranking points – can often be complicated and cause additional stress to children already cramming for the entrance exam.

Although she was not fluent in Serbian, Ziara started the Medical School in the Belgrade suburb of Zvezdara. She spent an hour every day on the bus from Stepojevac to her school and another hour back. The commute was less tedious because she always rode the bus with her friends from primary school, who went to the same secondary school as her.

Ziara’s homeroom teacher went out of her way to help her overcome the language barrier and adapt to the school. Many teachers helped her master the curriculum by tailoring their lessons, as well as the tests, to Ziara’s language level.

We can do more together!

No-one is alone in school. When we look back at our school days, we tend to forget that not only the classes and the studying, but also the school climate and our peers played a major role in the way we felt in school at the time. Being a newbie anywhere is a challenge, especially when no-one speaks your language, shares your customs, culture or religion.

Ziara’s communication with her peers was extremely wobbly at the beginning. She was extremely anxious whenever she had to speak Serbian, but her peers realised over time what she needed, they slowly corrected her mistakes and helped her learn Serbian. That very empathy and solidarity lay at the heart of their wonderful friendships lasting to this day. Changing one’s habits to fit in requires enormous effort, but the support of young people in her community that Ziara enjoyed further helped her build up her self-confidence and start loving the town she is living in.

Now, six years later, Ziara has a broad network of friends. She loves spending time and exploring Belgrade with them. Ziara told us she would not go back to Dubai, where she spent part of her childhood, and that she loves her life in Belgrade.

If you want to learn more about interculturality, acceptance and togetherness, take a look at our brochure entitled Encounters.

When I grow up I’ll be… ? College enrolment and the other ailments of student life

In terms of administration, refugee youths who finished a secondary school in Serbia have an easier time enrolling in college than those who need to have their documents translated into Serbian and their high school diplomas validated. Add to that the extreme stress brought on by the entrance exams.  Furthermore, refugee youths have trouble affording all the court-sworn translation and various additional fees, as well as completing the administrative procedures they can hardly be expected to finish by themselves if they do not speak Serbian. For instance,  the Qualification Agency’s ENIC NARIC Centre is charged with the recognition of foreign diplomas, but foreign nationals, refugees and asylum seekers have trouble filling the application form, which is provided only in Serbian.

After the entrance exams, which are conducted in Serbian, their final results and the rankings of the applicants are published. The tuition fees of applicants who passed the entrance exam with flying colours, are waived, while those who passed the entrance exams but scored below the threshold have to cover their own tuition fees. Affirmative measures are in place for Roma applicants, applicants with disabilities and other categories, but not for refugee and asylum-seeking youths. Under the Professional Guidance on Enrolment in Colleges Founded by the RS for 2022/2023, refugees and asylum seekers shall enrol in college on the same terms as Serbian nationals. The question legitimately arises whether these young people should also benefit from affirmative measures considering their vulnerabilities and their non-fluency in Serbian, as well as the many other adversities they face by virtue of their situation. Under Article 22 of the Geneva Convention relating to the Status of Refugees of 1951, “The Contracting States shall accord to refugees treatment as favourable as possible, and, in any event, not less favourable than that accorded to aliens generally in the same circumstances, with respect to education other than elementary education and, in particular, as regards access to studies, the recognition of foreign school certificates, diplomas and degrees, the remission of fees and charges and the award of scholarships.” The BCHR has thus been investing huge efforts in strategically lobbying for the implementation of this principle to ensure that all refugees and asylum seekers have greater chances of enrolling in college and other tertiary education institutions via affirmative measures. The state applies this support mechanism to provide equal opportunities and reduce the existing inequalities in society and thus facilitate comprehensive integration.

Ziara succeeded in enrolling in the Higher Medical School of Vocational Studies in Belgrade. The United Nations High Commissioner for Refugees helped Ziara obtain a DAFI scholarship to put wind in her sails and assist her.

Although our school days are one of the greatest and most carefree periods of our lives, college days have their own charms as well. We have no doubt that our Ziara will do well in college, but we are well aware of all the problems she may face. Freshmen are generally overwhelmed by college classes, mid-term exams and finals, but, with good integration and finding mates you can share your problems with, you are half way to resolving them.

Thanks to the DAFI scholarship, Ziara’s road to graduation will be much easier and stress-free. We wish her and all other students the best of luck in the new academic year.

“Education is what remains after one has forgotten what one has learned in school.”

If you found this short guide helpful and want to find out more about the rights and duties of refugees, migrants and asylum seekers, take a look at our website that deals with these issues.

More about BCHR’s activities on our social media profile and our website.