Kathia –Biochemist in the Making 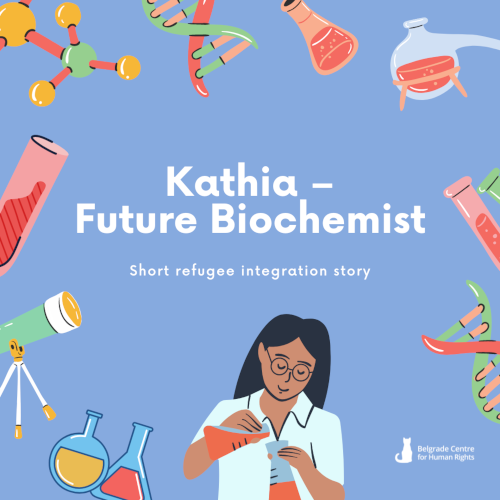 Kathia first came to Serbia from faraway Burundi in search of refuge in 2019 in the company of her mother. The twenty-three-year-old Burundian knew nothing about the country she had come to, let alone that she would soon adjust to the Serbian way of life, learn the language, start studying biochemistry at a state college, thus becoming one of the few refugee college students in Serbia.

Adjustment to the New Community

Kathia and her mother were granted refuge in early 2020. That marked the beginning of the long and complex process of their integration in Serbian society. They soon moved to Belgrade, where they rented private lodgings and began adjusting to the busy life of the Serbian metropolis. Kathia felt that she and her mother were generously welcomed by their new neighbours, who were always there to step in in case they needed help. Asked how life in Burundi differed from life in Serbia, Kathia replied that they were very different and that she had many more duties and responsibilities in Serbia. Another challenge in fulfilling her own expectations and those of the people around her arises from the fact that she is a full-time college student and has to follow class in Serbian.

In Kathia’s opinion, people in Serbia are nice, friendly and kind-hearted. She admits that she had not expected that the local population would accept her and her mother with open hands. She finds it interesting that people often ask her about her origins, why she has moved to Serbia and about her experiences in our country. In Kathia’s opinion, the communication openness of people in Serbia is one of the greatest cultural differences between them and people in Burundi.

Asked whether she has successfully integrated in Serbian society, Kathia says yes, but not fully – she still doesn’t feel she is fully accepted by the new community or that she fully belongs. Despite the years she has been living in Serbia, she feels she still needs to put in extra effort to exercise many of the rights guaranteed by law.

Administrative difficulties and institutional inefficiency refugees in Serbia face on an almost daily basis pose an additional burden on those who wish to integrate. Consequently, they have to wait a long time for documents they need for various reasons, while, on the other hand, some of the relevant institutions do not recognise the validity of these documents. Refugees are also in need of greater integration-related and legal aid in order to overcome the obstacles in communicating with individual state authorities and to access their economic, social and cultural rights in Serbia.

In Kathia’s opinion, integration in the host society requires, first and foremost, the desire and motivation to integrate. At the same time, the local community should be open and willing to accept refugees, but, as Kathia says, this is something she and people like her cannot affect because it’s “beyond their control”.

Kathia singles out mastering Serbian as the greatest challenge she faced in her endeavours to adjust to her new life in Serbia. It required a lot of patience, time and perseverance, she specifies. Adjusting to the new community and understanding its culture were the additional challenges she faced.

Kathia enrolled in the Belgrade University College of Chemistry as a full-time student in September 2021. She wants to become a biochemist and contribute to the development of this important field of the medical profession. Kathia was one of the first refugees in Serbia to enrol in a state college under the same terms as Serbian nationals, thus paving the way for the positive practice in the field of education for other refugees in Serbia.

Under the Law on Temporary Protection and Asylum, refugees are entitled to high education on equal terms as Serbian nationals. However, a devastatingly small number of refugee youths decide to pursue their college education. Positive examples, such are Kathia’s, are encouraging given that refugees face many administrative difficulties both at enrolment and subsequently, during their studies. We are thrilled by the very fact that a refugee succeeded in enrolling in a state college and continuing her education, because the education process will greatly facilitate her integration and inclusion in Serbia’s society.

Kathia found the preparations for the college entrance exam and enrolment quite challenging because, first and foremost, aspiring students have to be fluent in the language in which college classes and exams are held, as well as well-versed in the entrance exam subjects, which vary from one college and course to another. Kathia therefore had to be fluent in Serbian and well-versed in chemistry and biology to pass the entrance exam. She took intensive Serbian, Biology and Chemistry classes, which substantially helped her pass the exam.

Kathia admits that prepping for the entrance exam was gruelling, because she had to master Serbian and prepare the requisite admission documentation in a very short period of time. She needed help in putting together the documents and submitting them to the Qualification Agency charged with validating foreign school diplomas. The Belgrade Centre for Human Rights (BCHR) helped Kathia with all the procedures concerning her enrolment and validation of her high-school diploma issued in her country of origin. She acknowledges that she had a much easier time than others because she was in possession of her original diploma with her and the BCHR extended her its expert assistance. Validation of foreign school certificates is complicated if the applicants do not possess all of the required documents, as the BCHR has noted in its prior reports.[1]

After Kathia enrolled at the Belgrade University College of Chemistry, the UNHCR Office in Belgrade helped her obtain a DAFI scholarship, which covers administrative and tuition fees and other college-related costs, such as the purchase of textbooks and supplies, transportation, library fees, etc. Kathia says that the scholarship really makes a difference because it covers all her college related costs, whilst her progress is monitored through monthly reports. She admits that her studies would be infinitely harder without it, because she would have to work and, as she herself says, working and studying at the same time is not easy at all.

The freshman year was a challenge for Kathia because, as she says, it took her a bit more time to get used to following class in Serbian. Kathia, however, adjusted very quickly and her student life resembles that of any other student –  it is full of challenges and stress during exam time, but it is also full of laughter and positive moments. Kathia is also pleasantly surprised by how rapidly her college mates accepted her; at no point did she notice that anyone treated her differently than other students. She says that everyone at college is very nice and that she is extremely motivated to continue her studies and graduate.

In addition to studying chemistry full time, Kathia is actively involved in programmes of several non-government organisations in Serbia, which are extending legal and integration support to refugees and asylum seekers. Thanks to her knowledge of several foreign languages, she is often engaged as an interpreter and cultural mediator.

Kathia is also engaged as an assistant in the Refugees for Refugees (R4R) project activity the BCHR has been implementing successfully since April 2021. Successfully integrated refugees, like Kathia, are lending a hand to new refugees, sharing the experience they have gained in Serbia and information that will help them adjust to life in Serbia’s society successfully and efficiently. With her R4R hat on, Kathia has helped a substantial number of BCHR’s other refugee and asylum-seeking clients exercise the various rights they are guaranteed under Serbian law.

Asked how she saw her future in Serbia, this young and ambitious refugee from Burundi is very optimistic – Kathia sees herself as a college graduate holding a promising job in a few years. Kathia also hopes that her personal dreams will come true and continue living a peaceful life in Serbia.

* BCHR client Kathia’s account was published with her consent

[1] More on Kathja’s enrolment in the College of Chemistry in BCHR’s report Right to Asylum in the Republic of Serbia 2021, p. 143.