Out of sight, exploited and alone 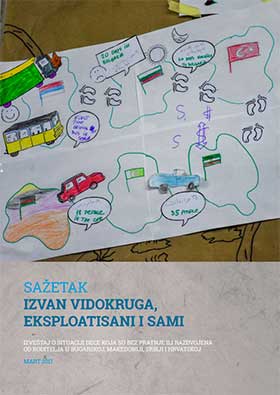 It is estimated that over 1,300 UASC are currently at risk of exploitation, violence and trafficking throughout the region due to ever restrictive policies of border controls and often inadequate response by the social protection systems throughout so-called Western Balkans migrant route. This is a brief summary of the report published by international organizations International Rescue Committee and Save the Children, in cooperation with ten national and international organizations, that are active in the field of protection of refugees and migrants. Among them is also the Belgrade Centre for Human Rights.

Some national systems along the route are failing to identify and adequately support these severely vulnerable children, some as young as nine, who have fled war or poverty and travelled under the radar for thousands of kilometers without parent or guardian. They are invisible to the authorities, and in some cases even when identified, they are placed in inadequate conditions, sometimes even detained. This is causing desperation and pushing many into the hands of smugglers and traffickers, who children see as their only way out.

Children are dealing with massive amounts of stress, danger and neglect, and while some try to put on brave faces, their drawings show chilling details of the brutality they face on journeys that were meant to get them to safety.