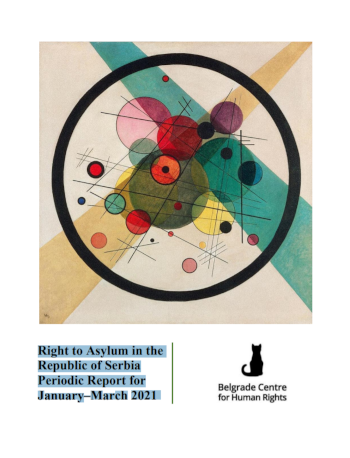 Belgrade Centre for Human Rights has compiled a periodic report covering the first three months of 2021, addressing specific issues that, in view of its team, were particularly important in the reporting period. They include Constitutional Court decisions on claims concerning violations of some of the fundamental human rights of asylum seekers and migrants, which the BCHR had alerted to in its prior reports, as well as analysis of the asylum authorities’ practice and some of their noteworthy adopted decisions. Difficulties and challenges in integration of refugees maintained, however, there are some identified headways in exercising of particular rights, such as right to education. Refugees, asylum seekers and migrants were allowed to sign up for vaccination and be vaccinated in the first quarter of the year, following the procedure of immunization launched in the Republic of Serbia at the end of 2020.
The authors endeavored to point to examples of good practices, but also to certain gaps in regulations and in the work of competent authorities, through the perspective of human rights standards, as well as through the personal stories of asylum seekers. The aim of such an approach is for the Republic of Serbia to develop a more functional asylum and integration system. In this regard, the BCHR team offered recommendations for improving existing solutions.

You can view the report on the following link.